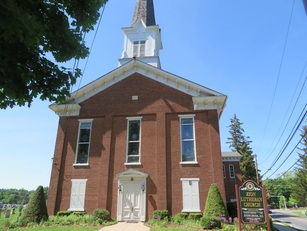 ZION LUTHERAN CHURCH, Built: 1868.  Original use: Constructed for its current use as a Lutheran Church.  Items of note: Post and beam design of the Church incorporates many elements common at the time in traditional German construction.  However, combinations of German and  American architectural styles  are evident throughout. The symmetry  of the exterior reflects a Georgian style that is American, while the interior of the church is German in design. The architectural style can be called “German Georgian”.  Unlike its German counterpart, American churches had Sunday school and floor.  In 1910, the memorial stain glass windows were added.  Four years later, the gasoline lights were replaced with electric.  In 1925, the pipe organ was purchased and installed, to be replaced in the 1970s with a new organ.  The exterior of the building is composed primarily of brick laid in the English bond style, except the lower front which has the more aesthetically pleasing American bond style.


In the front hallway is a glass encasement that houses original communion-ware and a Lutheran Bible written in German that had been in use since the earliest days of the old stone church.   When the congregation first started in 1825, Zion Lutheran Church was united with St. John’s Reformed  Church and they worshiped in the same building, referred to nowadays as the “old stone  church”. The groups eventually split, perhaps due to increased numbers, and Zion built the  neighboring  Zion Church , across the street from St. John’s UCC and near to the shared stone Union Church.  Interesting to reflect that  German is still the main heritage of Pennsylvania and most of the USA.  German was nearly selected as our national language by our colonial forefathers.  Yet, at the time of construction of the Zion Lutheran Church,   German-Americans were still considered as outsiders by many Americans.  The building’s architecture is a testament to how they melded into the American mainstream by adopting attributes of their new country while blending many of their rich traditions into the American melting pot.