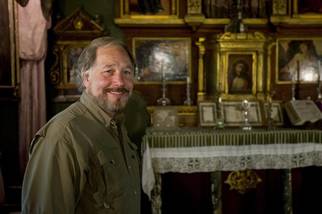 The Columbus Chapel and Boal Mansion Museum announced its new Museum Director, Robert D. Cameron of Boalsburg PA, on Monday March 23, 2015.  Mr. Cameron has been enthusiastically guiding the reins of the Museum since then.

Mr. Cameron has a wealth of experience, both corporate and nonprofit, that will significantly contribute to his success as Director. He is currently an adjunct professor at Pennsylvania State University, providing occasional courses in engineering, horticulture, landscape architecture, and sustainable technologies, while conducting research into the integration of sustainable technologies with architecture. He has also taught environmental courses at Penn State’s College of Technology in Williamsport, PA.

From 1995 to 2005, he was president and CEO of Olde Cloverleaf Village in Danville, PA, a tourist destination that he reconstructed from 24 historic buildings, which included three restaurants, a winery, a B&B, and many stores. The historic site gave tours and presented frequent and varied events for the public. The highly successful project received the Governor’s Award for Environmental Excellence.

For 21 years, Mr. Cameron was a vice president of Tenneco, Inc., in Chicago, directing the company’s Environmental, Health, Safety, and Technical Research Group. He developed and managed international teams of engineers and scientists and was responsible for a multimillion-dollar budget. Numerous team projects received state and national awards during his tenure.

Before working at Tenneco, he had founded his own company, PennTex Corporation, in Houston, TX in 1977. He designed and constructed sustainable residences and designed and restored historic commercial projects in Texas, Illinois, and Pennsylvania.

Mr. Cameron received a combined BS in microbiology and animal sciences, with minors in chemistry and geology, from Penn State University. He received an MS in environmental management from the University of Houston and recently returned to Penn State to work toward a PhD in Plant Sciences, attaining a final GPA of 4.0. He received the AWMA Centennial Award for Research and the Howard F. Martin Outstanding Teacher Award.

His experience in fund-raising and grant writing, along with his detailed knowledge of antiques care and building restoration, will greatly benefit the Museum. His energy and enthusiasm for revitalizing the Columbus Chapel and Boal Mansion Museum are infectious and exciting. We look forward to implementing his ideas for new and frequent events at the Museum, and working in conjunction with other museums and other community groups.

The Board and its volunteers welcomed him and the surrounding communities did so as well!