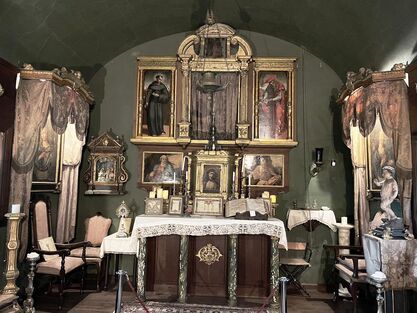 ​The Columbus Chapel is the most important Columbus collection on the North American continent. It was part of the Columbus Castle in Asturias, Spain, and was inherited in 1908 by Mathilde de Lagarde Boal from her Aunt Victoria Montalvo Colon and imported to Boalsburg in 1909 by her husband, Colonel Theodore Davis Boal.

Among the contents of the chapel are European oil paintings and statues from the 15th through 18h centuries, original vestments of the clergy, and two pieces of the True Cross of Jesus, which were given to the Columbus family in 1817 by the Bishop of Leon in Spain.