This is just a brief virtual tour, you will be able to see more if you come visit the Boal Mansion Museum and see the place for yourself! 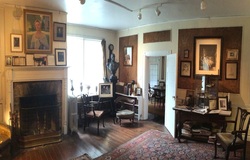 Boal Mansion Living Room/Library
This living room/library is the most interesting room in Central Pennsylvania. The room was added to the Boal Mansion shortly after 1809 by David Boal, the first generation of the Boals. There are 5 presidential signatures within the room itself. In the room, you will be able to learn about the Boal and Columbus family connections as well as Napoleon! If there are some things that raises questions, stop by for a guided tour! 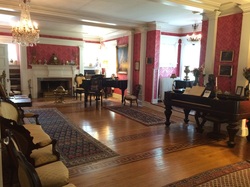 ﻿Boal Mansion Ballroom﻿
This ballroom was added to the Boal Mansion in 1898, by Theodore ("Terry") Davis Boal. It shows the elegance ﻿that Americans were seeking a hundred years ago. Here you can find many artifacts that features the members of the Boal Family as well as associated Columbus Family members. Take a look around and stop by for a real tour! 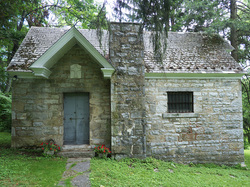 Columbus Chapel
﻿The chapel was brought to Boalsburg in 1909 from the Columbus family castle in Asturias, Spain. You'll be able to find the Columbus coat of arms, Columbus' admiral's desk, as well as the True Cross of Jesus.﻿
Powered by