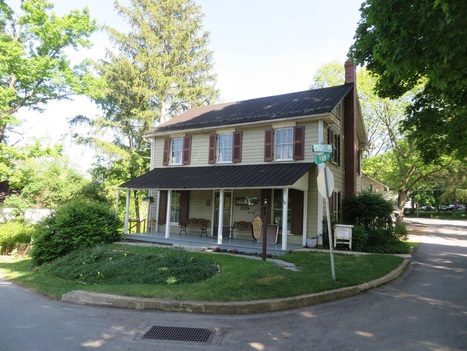 When Daniel Musser purchased the lot from tanner Samuel Stover in 1842, there were two buildings standing: a tannery and a log house. A tanner himself, Musser put the tannery to good use but he and his family did not initially reside in the log house. Rather, they built the current structure on the northwestern part of the property in 1825.   It is a two‑floor; gabled building with three bays and is now the home of the Boalsburg Heritage Museum.

A transom rests atop the front door, which lies between two enlarged two‑over‑two sash windows, flanked by paneled shutters. There are three-six over six sash windows bordered by louvered shutters on the second floor. Four chamfered posts and a shed roof comprise the porch, which extends across the front of the house. A chimney with a corbelled cap extends upward from the west gabled end of the building. The full chimney is visible on the exterior of the west gabled side.

The second‑floor windows are six‑over‑six sash windows with louvered shutters; the first floor windows are enlarged two over two-sash windows with paneled shutters. This pattern is repeated on the eastern side with the notable exception of the chimney. A door leading to the basement is also present on the eastern side. The door is surrounded by fieldstone, which forms the house's foundation and is flanked on the left by a six over six window and on the right by a two‑over‑two window.