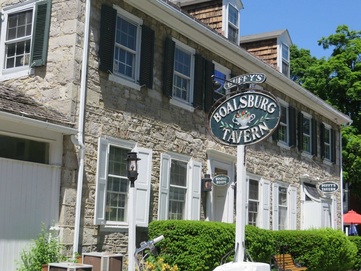 Built:  circa 1819.   In 1818, James Johnston Jr. purchased the lot for $100 from a speculator.  The lot, along with 59 other ¼ acre parcels had been mapped oout in 1808 and offered in a lottery for 11 dollars each by Andrew Stroup in May 1809 thereby establishing the  village of Springfield (soon to become Boalsburg).  Records indicate an improvement on the property in 1819, but completion of the limestone tavern may have taken several years. Johnston’s tavern had a strategic location in the “diamond” (town square) of the new village and fronting on Pitt Street, the main thoroughfare to Ft. Pitt (Pittsburgh) serviced by stage coach.  In addition, it was established during the peak of  America’s alcohol consumption between 1790s  and early 1830s.

It is estimated during this time, that American males drank approximately 9 gallons of distilled liquor, nearly one half gallon of wine, and twenty-eight gallons of beer per year.  It was typical to have a drink  at breakfast, mid morning, lunch, between meals, at dinner, and as a nightcap before going to bed.  Laborers were often paid wages and liquor.  Drinking hard liquor on the job was acceptable and often provided by employers during breaks. There are a number of thoughts as to why so much alcohol was consumed including the belief that it was healthy and as a source of calories to fuel the hard labor.  Taverns played a major role in America’s alcohol consumption, but they were not only associated with drinking.  Taverns also provided a major center for news, politics, mail, and social interaction.  In addition, many taverns also served food and provided lodging for travelers.  Social activities in many rural taverns included dances, assemblies, and public meetings.

During elections taverns usually became the central place to vote and gain votes by the candidates who were expected to supply the voters with as much alcohol as they wished!  Another popular use of the tavern was for the lodging of travelers.  The Boalsburg Tavern was the site of many of these everyday occurrences and community events.  Because of the stagecoach line running through Boalsburg and stopping at the tavern, any mail, newspapers or oral information would have been first heard at the tavern.   Subsequent owners, including Johnston’s grandson, James T. Stuart, and James Jack (known as Whiskey Jim)  operated the tavern through the 19th century.  Curiously, several of the owners, including Stuart, operated the tavern and boarding area, but would not sell liquor.   Theodore Davis Boal, was one of the owners in the early 20th century, but when his family fell on hard times due to the great depression, he was forced to sell a number of properties but was able to retain the tavern.

But, on Valentine’s Day, 1934 a fire swept through the building, destroying  most of the second story interior and significantly damaging the first floor.  The building sat exposed to the elements for the next several years.  In 1937, Theodore and his son, Pierre, were sued by the 1st National Bank of State College and forced to sell the Tavern and adjacent property to the Bank for $750.  Roanna H. Winsor purchased from the Bank the two lots which included the tavern and stone dwelling attached to it, a store room, a small brick house, a stable, and other outbuildings for $1500.  Winsor undertook the extensive post-fire renovation and reconstruction of the building and followed closely the Historic American Building Survey which had documented the tavern details the month after the fire.  Much of the original materials were salvaged and reused including the windows, first floor doors, and the original oak floor joists.  The second floor of the west wing was where Winsor had her living quarters.  Her windows and fireplace were done in an American Southwest style, reflecting her early upbringing in that part of the country.

After serving in the U.S.Navy during WWII, Roanna Winsor sold the property to Harry F. and Mary C. Duffy for $1.29.  From 1946 to 1971, the Duffy’s owned and operated the building as Duffy’s Boalsburg Tavern.  In October, 1971, Carl E. and Joanne L. Hacker bought the property for $55,000.  They undertook a series of renovations, including the elimination of guest rooms and replacing them with the large ballroom as James Johnston, Jr. had built.  Today, Darren and Tracey Moriarity own and operate the Tavern.