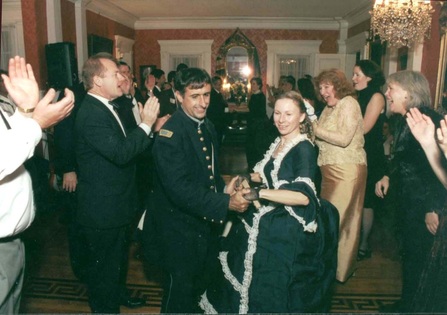 The Columbus Ball on October 11 at 7:30
(Boalsburg, PA) -  Boalsburg will celebrate the birthday of the historic village and of America itself with a free festival on the Columbus weekend to raise heritage awareness and with an elegant benefit ball to “raise the roof” and fix roof leaks now threatening the two-hundred-year-old Boal Mansion Museum.

A surge of community support to save the Boal Barn Playhouse has resulted in repairs that have complied with fire and safety codes. Now plays are slated to return in the summer of 2015.

Buoyed by this success, the Boal Museum Board has decided to try another very big project -- reroofing the northern portion of the Boal Mansion Museum.

“There is an urgent need to put an end to leaks that are damaging the internationally renowned historic building and the collection within,” says Museum CEO Christopher Lee.

Project architect Philip Foreman estimates it will take $200,000 to replace the existing crumbling leaking asphalt shingle roof with a long-lasting standing seam roof as recommended by the Architectural Conservation Plan written for the site by Architect Dale Frens of West Chester.

Fund raising for such an expensive project also can be fun raising and the roofing campaign is no exception. The campaign will kick off with a gala “Let’s Raise the Roof” ball at the Boal Mansion on October 11th at 7:30 pm that will honor major contributors to the campaign with champagne, punch, abundant hors d’oeuvres from area restaurants and contra-dancing.

The festive event will also feature a mid-evening speaking appearance of historical characters from the eight generations of the Boal family and their friends, some in period dress, who have shaped the community and the nation.

Many of the historical characters again will appear at the Boalsburg Heritage Birthday Festival in the village square the following day on Sunday, October 12, from Noon to 4 pm. The festival commemorates the founding of Boalsburg in October 1808 and Columbus’ historic landing in the New World on October 12, 1492.

The Columbus focus is explained by the fact that the Columbus Chapel at the Boal Mansion Museum is the strongest tangible link in North America with the famous explorer and has been featured on BBC-TV in the United Kingdom and Belgian National Public TV in Europe. The Museum is open daily to the public. Details can be found at the Museum web site at BoalMuseum.com.

During the festival, popular free wagon rides with a tour guide will be offered through the village and down to the Boal Mansion and Columbus Chapel, which will be open from Noon to 5 pm.

Donations for the museum roofing project may be made to the non-profit “Boal Mansion Museum,” PO Box 116, Boalsburg PA 16827. For more information on the project or the festival and for tickets to the October 11th benefit ball at $100 per person, access boalmuseum.com or contact office@boalmuseum.com or 814-466-6210.