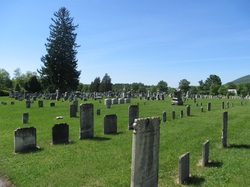 THE BOALSBURG CEMETERY, strategically and symbolically located next to the two historic churches, not only stands as a constant reminder of  the religious significance of death, but  as a result of  three women’s effort on July 4, 1864 provides claim to Boalsburg as the home of Memorial Day.  These three pioneers, Sofia Keller-Hall, Emma Hunter-Stuart, and Elizabeth Meyers, were at the cemetery that day for different reasons, but decided on the common goal of paying respect to those who had lost their lives fighting for the country by decorating their graves.   The women and many of the Village residents had loved ones killed in the Civil War and buried at the cemetery. Today, a bronze statue of the women stands near the northeast corner of the Cemetery as a reminder of their devotion.  Each Memorial Day, a procession from the Boalsburg square led by flower bearing children followed by numerous people, walks the same historic steps that the three women took to the cemetery in honor of their loved ones, and the traditional service is held as it has been every year since 1864.

Also of note is how the simple, rectangular shape of the  old cemetery, mimics the shape of  the village of Boalsburg’s original rectangular layout of the 60 lots.