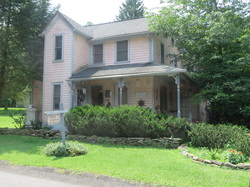 Mr. Wright and his wife, Helen Leah Rackey Wright, lived here until 1938. He was thresherman and owned a threshing machine which he took from farm to farm during the harvest season to thresh the farmers’ grains.

According to Mrs. Kline, the house is “built like a barn, with pegged hand-hewn beams.” While the first floor ceilings are of normal height, the second floor ceilings are low enough to give a tall person reason to be cautious. She declares that the house “was moved over from Stone Valley” to this lot in very early days.