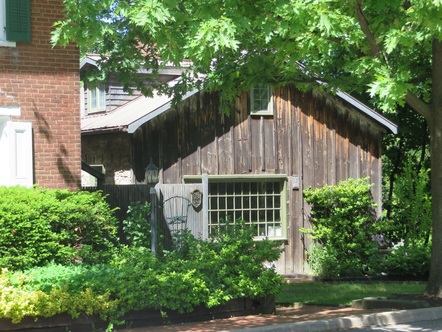 Original use: one of first taverns in area on Kings Highway, later became known as Fort Pitt Highway, route 45, then Main St.  The tavern is thought by some to have been built in 1803 by David Boal.  However, the deed indicates that when William Richards  sold the sixty plus acres on which the tavern was located to David Boal  in 1803 for 313 pounds (the English denomination still in use at that time in Pa.)  there were already a house, stable, and barn.  A possible explanation is that David Boal converted these buildings into the tavern.   In 1804, David Boal received his liquor license and served the genteel travelers through town providing them a place to rest, eat & drink, and discuss the issues of the day.

The tavern prospered and in 1807 David Boal sold the property to James Morrison.  A year later the plot plan for the town of Springfield was made.  The tavern continued to prosper, despite changes in ownership until around 1819 when a new tavern was built on the diamond by James Johnston, Jr.  The new tavern became the place for the genteel, relegating the David Boal Tavern to be patronized by the local residents.  This business too would be short lived, for a little over a decade later Wolfe Tavern would open on the west end of Main Street catering to drovers and wagon drivers and taking the remaining business away from the tavern.  In 1827, John Bell bought the tavern and surrounding property, converting the tavern into a general store.  Subsequent owners used the tavern as a storage facility for their personal items.

Joseph Meyer purchased the property in 1864 and began to build the brick house that stands there now.  Unfortunately, he never got to see its completion since he died of heart failure in 1868 while playing the newly installed organ at St. John’s Reformed Church. (See the Church plaque for more details).  The limestone blocks of the tavern were quarried  locally as were the  stone for other  buildings on Main Street.  The side facing Main Street was later covered with wood facing to make it more aesthetically pleasing. Also added was the 4 ft.X 6ft. picture window.  The dormer on the roof was the only source of light for the second floor which served as the sleeping area for patrons of the original tavern.  The interior of the tavern is divided into two floors.  The first floor is 1 room, which was meant for eating and socializing. The walls and the ceiling are a mixture of horsehair and plaster that were common to the time period.  Directly to the left of the main entrance door is another door which leads out to the stable.

Adjacent to the stable door is a five feet wide fireplace which served for both heating and cooking.  The second section of the house  is the stable constructed of wood and connected to the south end of the tavern. The wooden frame house attached to the tavern was moved in 1870 to Church St. where today it  serves as Keene residence and barber shop. In the 1960s, the Dale sisters sold off the barn and lot to Howard Swank for $200 and the side yard to Naomi Reitz for $100.  Janis and Susan Spalvins have restored the house and tavern to its original form as much as practical. With the exception of the front wall and  addition of electricity in the 1980s, the stone tavern has not been altered.