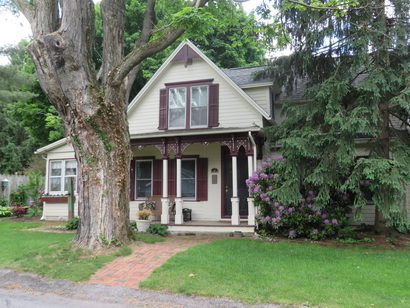 The Rutters currently occupy the house at 220 Academy Street that was most likely built by either James Logue (owner, 1861 ‑ 1863) or Mary A. and Samuel B. Grossman (owners, 1863 ‑ 1870).  James Johnston, the first owner of the lot, was an affluent landowner in Boalsburg and most likely held the land for its value, not its real estate. Increasing value in the tax records indicates that first, the land was sold, and then the house was built.

Phase one of the building “the original house" was a one and a half story cottage with three bays that had a gable roof with gable windows on the north and south sides. The gable side, the triangle now tucked under the roof, is the current east-facing façade of the house. The roof was covered with square or butt shingles. The first floor windows on the north side are now six over six-sash windows but they are probably not the originals. The house was built using plank construction and horsehair insulation, an affordable and practical method of insulation at that time. The house was originally one room deep and two across. The east room served as a living room, where a fireplace may have been at some point. The west room was the kitchen and there were bedrooms upstairs.  There is a large threshold that leads to the north side of the house, which is currently a bedroom. The threshold indicates that the front door was in the center of the north side. Currently, there is one window to the west of the door and there was in all probability one equidistant to the left, so the former north side was symmetrical.  An interior wall that now divides the living room and kitchen is thick enough to be a former exterior wall. The house probably originally ended there but was later extended.  Seams and varying siding patterns also support the original size theory.

Phase two occurred when Catharine Woods revamped the house when she moved there in 1870 by first adding a one story tall - one bay addition to the house on the north side. This caused a shift of the axis of the house onto the east gable end of the house, facing Academy Street. The new east façade had three bays and one and a half stories. The windows are arranged differently from the north side, indicating that the east side was not the original front facade.  The ell addition was added before 1874 because the 1874 Centre County Atlas outlines Ms. Woods' house as phase one plus the addition.

Phase three was the largest renovation the house received when in 1874 Ms. Woods added to the north and south sides. The single story north addition has different siding that is not consistent with other siding on the house.   Also, the cross gable roof of the second story addition is slightly higher than the original roof of phase one. The addition contains one bay and the window is two over two.  An interior step was added from the original second floor to the second story addition of the ell because of the difference in height.

The seams on the south exterior wall indicate that the house was added onto and the middle part of the south side addition was enclosed. The southeast corner was probably an uncovered side porch and it was later covered and incorporated as a room in the house.  All of these additions most likely occurred between 1873 and 1874 because the property value jumped from $250 to $680, indicating an enlargement and improvement of the real estate.