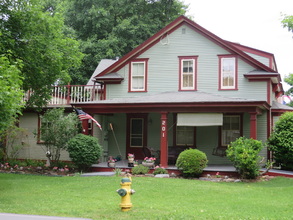 J.C. Sheneberger built the house at 201 N. Church St. as a two-room rental in 1874 and over the years it has had several additions and modifications. The oldest part is the south section that fronts on Pine Street.  A kitchen ell was added in 1930 after a fire and finally, an addition comprising bath, dining, and living areas was added during the 1980’s. The lean‑to, chimney, porches and bay window were also added at various times during the home's history.  The whole house is covered with 3-3/4 inch clapboard except the lean‑to addition that has aluminum siding.

An intriguing question arises when defining the front of the house.  It is located on the comer of North Church Street and East Pine Street on Lot 28 of the original town plan (Deed book 317, page 107). Its address is 201 North Church Street, so it might be assumed that it fronts on Church Street.  The present owner most frequently uses the entrance from Pine St. but he calls the Church Street porch the "front" porch.  Most 19th century homes in Boalsburg have no front yard and abut the sidewalk.  The Pine Street side of the home follows this pattern, but there is a deep yard on Church Street side.  The overall setting of the house implies that it fronts on Pine Street, as the gable end of faces Church Street. The deed book (395, pg 449) resolves the question as the house was at one time designated as 101 E Pine.

Several porches have been added. The Pine Street entrance porch has two plain square columns and a sloping roof.  The front of the house on Church Street has a porch that extends the whole side and shelters three bays. Three square Doric columns that are bulkier than those facing Pine St support the sloping roof on this side.   Lastly, the present owner recently added a new porch to the North side.

Inside, The two south rooms are of a similar size. The eastern room has a door and window on the south wall and a fireplace on the eastern wall. The western room has a bay window. Both have identical, thin, machine produced, wood flooring.  A door enters the home from the west, or Church Street side and opens to a hallway parallel to Pine Street. Stairs leading upstairs from the door are located in the hallway.  The ell shaped kitchen addition is located behind the hallway on the eastern side of the house.