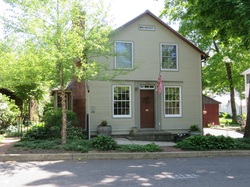 Circa 1850.  Original use: deed for property lists “out buildings” and the original portion of the house was one of these buildings; possibly used as a stable/barn.  An early owner of the property, John “Daddy” Sechler, was a shoemaker and may have used the building for his shop. He and his family lived in the adjacent house at 132 W. Main St.  Sechler  purchased the property  from Joseph Einstein, of Philadelphia in March of 1858.  Einstein had acquired the property during a Sheriff’s sale in 1850 which listed a 1 ½ story dwelling(now 132 W.Main St).  Thomas Riley, another shoemaker, acquired the property from Sechler  in 1877. The tax assessment records indicate there were three shoemakers in Boalsburg in 1874.  Boalsburg’s tannery which would have supplied the leather for shoe making was located near the present day site of the Boalsburg Heritage Museum.  There is some conjecture that Sechler and Riley may have actually had a shop closer to the tannery.  In the 1920s, a subsequent owner used the building as a feed store. The  store  was  in an outbuilding for the house that is now at 132 W. Main.  The property was divided in the 1970s.  Large lintel over front door may have been from sliding door of feed store.  Can see flagstone(below right, front window)  at the probable level of the street at the time of the feed store in the 1920s.   Original structure is a frame barn(with vertical planks) over a stone foundation.  Original roof was pegged, but had to be replaced because of outward thrust on walls.  An iron pin with stars holds the side walls together.  Iron stars are hidden under the clapboard siding.  Original structure had no heating or staircase, just a ladder to the loft.  Renovation work plus a two story addition were added in 1990.  Fireplace and chimney were also added at that time.

Shoemaking:  For centuries, people crafted shoes in their home, usually the kitchen area.  There are two basic parts to a shoe: the upper and the sole.  Constructing a shoe requires four basic steps- cutting from leather, fitting , lasting(a last is the form shaped like a foot), and bottoming(attaching the sole).  A craftsman needed only eight essential tools for his trade: a knife, awl, pincers, last, hammer, lapstone, and stirrup.  A shoemaker’s shop was small and nicknamed “ten-footer” due to their typical size of 10ftX10ft. In 1809, David Mead Randolph invented the first shoe making machine.  However, the machine that revolutionized the industry was Singer’s sewing machine.  These technological improvements signaled the beginning of the end for the individual shoemaker  as factories took over the mass production of  shoes.  However, the transition was slow and the skills of the independent shoemaker were  sought after in rural areas into the 20th century.  The 1860 Centre County census lists 17 shoemaking establishments with thirty-one men employed.