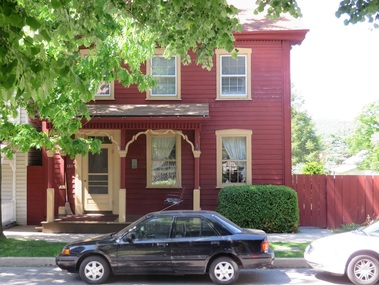 Thomas & Sally Johnson purchased the lot from Andrew Stroup in 1809 for $11 and subsequently sold it a year later to Daniel and Mary Dunlap for $13.15.  Daniel, a carpenter, built his family home sometime within the next several years.  As with many of the homes built in Boalsburg during this time, the building was constructed of logs.


Although the Swedes are credited with being the first settlers to build log structures in America, the practice was widely used by the Germans and Scots-Irish during the period of frontier expansion in the 18th and  early 19th centuries. The logs in the Brassington house are squared with notched ends and were locked into place by their own weight.  The large and abundant chestnut trees were the wood of choice.  The cracks and joints were covered with horse-hair plaster and the logs then sided with split boards.  Narrow split boards cover the front of the house, giving it a more elegant look, while wider boards cover the rear of the house. .


At time of construction, the building was  built as a “modern” house with stoves throughout instead of inefficient fireplaces.  The summer kitchen may have been added to the house soon after it was built.  It allowed cooking to be performed outside the main body of the house during the warmer months and thereby kept the main house cooler.  The house has a rubble foundation with mortar being used only to the frost line.  The architectural style is a Georgian farm house with subsequent modifications representing Greek Revival (moldings on the front side corners and front door) and Gothic Revival (front porch). The interior of the home retains many of the original decorative elements.


During a 1973 renovation, early stenciling of the walls was uncovered.   In 1820 the Dunlaps sold the property to John and Nancy Irvin who in turn sold it to John & Mary Karn in 1829.  John Karn was a gunsmith and he died suddenly without a will in 1831.  Karn’s heirs maintained the property until 1853, when they sold it to the Reverend Peter S. Fisher for $275.  The Reverend sold off  some of the lot and then sold the remaining property with the dwelling to Charles & Rachel Schaffer for $1,000 in 1861.   The property has passed through 13 owners and is currently owned by David Brassington, who purchased the home in 1963. During renovations, David Brassington has uncovered artifacts such as a “fiddleback” pewter spoon and a Bennington style pie plate, which provide glimpses into the everyday lives of the previous owners. In 1964, David Brassington was instrumental, along with Pierre Boal and Dr. S.K. Stevens, Executive Director of the Pennsylvania Historical and Museum Commission, in pressing the issue of historic zoning within the village which eventually in 1975 resulted in the Village District Zone and ensured the preservation of the historic character of the community.