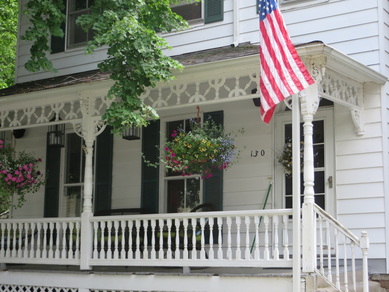 The deed trace of the property at 130 East Main Street, Boalsburg shows that Adam Will was the first to buy the lot in 1809.   Michael Stiver who was a carpenter, built the house in 1837

shortly after he purchased the property from Daniel Kimport.  A federal style fanlight over the door reinforces the belief that the house was constructed in the early portion of the nineteenth century.  Stiver sold it in 1860 to James Mauck who was a chair maker and he in turn sold it to Jacob Ferrer who made grain cradles in Boalsburg.  Ferrer died in 1881 but his wife Sarah lived there until 1892 when it passed on Ella Rothrock in 1898-00, Alfred Lee (00-01), and Dr. L.E.Kidder in 1901.

The house consists of three bays and a center gable facing towards the street. The front porch is unique to Boalsburg as it wraps around the right side of the house. Only two other houses in Boalsburg display such a porch. The house was built with a plank frame however the original wooden planks have since been covered over with modem aluminum siding. The current front door exhibits a six‑over‑six sash window and six additional two‑over‑two sash windows face the street. There is one original four‑paneled window in the attic that can be seen from the side of the house.

The interior has a side‑hall floor plan with living and dining rooms on the left and a stairway to the right with its original steps but a renovated banister. The second floor has two bedrooms with two built‑in closets, one bathroom, and two small guest rooms. The second floor rooms all have a few small steps upon entering through the doorway. In the attic, the interior of the walls and an abandoned chimney are visible.   A chimney on the left side of the house is visible in the attic that corresponds to a covered‑over fireplace in the downstairs living room. There is a non-original shed in the backyard.  Not far from the shed is the outside basement entrance that is extremely difficult to get into, even for the smallest of people.


It is clear to see that the house was renovated a few times throughout the course of its lifetime. The backroom behind the kitchen has different dimensions than the surrounding rooms. The next-door neighbor believes that the same back room was once used to butcher animals, although there is no evidence to support this theory. In addition, the dining room was at one point extended out about seven feet to the left side of the house. New windows were also added to the new side and the old shutters were stored in the attic. The porch was also extended to reach the newly expanded dining room.