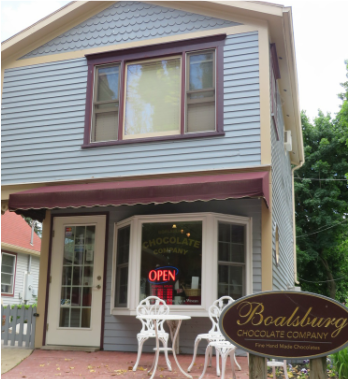 Deeds to Lot 9 in Andrew Stroup’s plan, sold by lottery to John Barr, give evidence that a house had probably been constructed on it between 1824 and 1833 when it became the property of Michael Eilert. Dr. L. E. Kidder, who bought the house in 1898, used the large front room of the left side for his medical practice. He sold it to the Ernest HEss family, owners until 1965. Woodwork in two different “styles” indicates additions. The front right room is in the early house and is entered by the former exterior door, which is very wide and has its original hardware. A “Good Morning” staircase - steps leading from different sections of the second floor meet at a landing - is a distinctive feature of this large frame house owned by Dr. Edna Raphael.