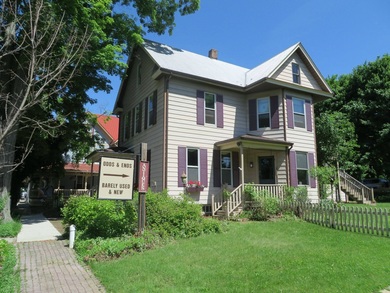 The house was built around 1900 by John and Effie Leitch Jacobs. John was a local school teacher and popular fiddler, always in great demand for dances and parties. Given the date built, the typical method of construction would have changed from the log construction common before the mid 19th century to balloon construction.  This latter form of construction used wood framing and vertical boards that would run from the bottom of the house to the roof.  The second floor would be “hung” onto the walls.  Modern residential construction builds one story at a time, so the framing is only 1 story tall.

Note the little log cabin on the adjacent property.  If you could peer below the siding of most of the homes on Main, Pine, and Academy streets you would find that each was built of logs in a similar fashion.   On the interior, log homes were usually covered in a plaster mixture of clay, lime, and horsehair.  Especially where subsequent additions have been constructed, some of these interior walls have  had the plaster removed to expose the massive log beams.

An earlier house known to have been on the site by 1855 was burned in the great fire of the late 1890's which consumed the George Jack store, the Post Office, and property of the gunsmith David Young. Owners of this earlier home included George Johnston (1855), James Johnston (1864), George Jack (1868) and Wesley and Elizabeth Myers (1891).