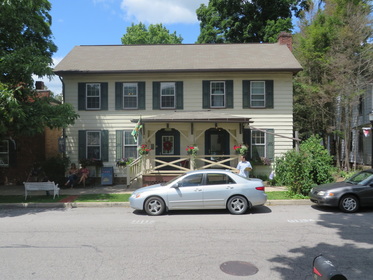 The house at 121 E. Main Street is a five‑bay house, with two central doors. The windows are double‑hung, six‑over‑six sash windows, which were popular pre Civil War. Paneled shutters surround the windows. The two doors have transom windows above them. The house has vinyl siding, which is laid in clapboard fashion. It has a central porch on the front, which is covered by a shed roof.  The porch is decorated with posts, brackets, and an open, cross‑braced rail.  It has braces in the corners, latticework underneath, and features heavy ornamental decorations that were typical after the 1860s.  The house has a gabled roof, which features a box cornice and has central placed chimney on the east gable end. The gable ends of the house have double‑hung, six‑over‑six sash windows.

The house has a central staircase and four rooms on the main floor. The room to the right of the entrance contains the only fireplace in the building.  It has a wood mantle piece and is surrounded by wooden columns on either side. The casings around the doors and the windows are flat board and lack decoration.  The room upstairs to the night of the staircase has a chair rail, as does the room containing the fireplace on the first floor. The first floor room with the fireplace contains cornice molding that is not present in the hallways or any other rooms. There are built‑in closets located in all the upstairs rooms and in the back left first‑floor room. The central staircase is a straight run stairway with a handrail. The banister rails are simple, identical, and have no decorations, which suggest they were factory produced.   A door under the staircase leads to the basement that does not appear to be as big as the entire house. The basement is low in height and while most of it appears to be made of cut stone, concrete masonry units are mixed in.

There is evidence that the house dates at least to 1824. According to a sheriff s sale, John Irvin purchased the 121 E. Main Street lot, which had been owned by John M. Beuck.   According to the 1820 Haines Township assessment records, Mathias Beuck was a cabinetmaker and was the son of John Mathias Beuck, who lived in Aaronsburg . This tends to suggest that the son Mathias Beuck was the original resident of 121 E. Main Street and not his father. The house was shifted to an unnamed retired collier in 1827 and in 1842 sold again to Charles Rainey a weaver and later postmaster who owned it until 1854.   James Mauck a chairmaker, was the next owner and resold it 1866 to David Ross a farmer who kept it as a rental.  He in turn sold it to Duncan Rankin 1871 but Rankin shortly died and the house passed to his wife who lived there and later sold it to L.E. Kidder in 1910.