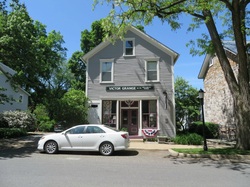 Original use: Grange Hall; Currently occupied by Vaughn Shirk Interior Design.  Prior to the current use was occupied by  a series of small businesses, including photographer and rug shops.

The National Grange of the Order of Patrons of Husbandry, also simply styled the Grange, is a fraternal organization for American farmers that encouraged farm families to band together for their common economic and political good. Founded in 1867 after the Civil War, it is the oldest surviving agricultural organization in America, though now much diminished from the over one million members it had in its peak in the 1890s through the 1950s. In addition to serving as a center for many farming communities, the Grange was an effective special interest group for farmers and their agendas, including fighting railroad monopolies and pushing for rural mail deliveries. Indeed, the word "grange" itself comes from a Latin word for grain, and is related to a "granary" or, more generically, a farm.

In 1865 President Andrew Johnson sent Oliver Hudson Kelley to the South to collect agricultural data. As a Northerner, Kelley was greeted with suspicion. However, he was a Mason, an affiliation that overcame sectional differences. Kelley saw the need for an organization that would bring farmers together and advance their interests. After consultations with the other Founders, the Grange was born in 1867. Membership in the Grange increased dramatically from 1873 (200,000) to 1875 (858,050) as many of the state and local granges adopted non-partisan political resolutions, especially regarding the regulation of railroad transportation costs. The organization was unusual in that it allowed women and teens as equal members. In fact, four of the sixteen elected positions can only be held by women. Rapid growth infused the national organization with money from dues, and many local granges established consumer cooperatives, initially supplied by the wholesaler Montgomery Ward. Poor fiscal management, combined with organizational difficulties resulting from rapid growth, led to a massive decline in membership. By the turn of the century, the Grange rebounded and membership stabilized.