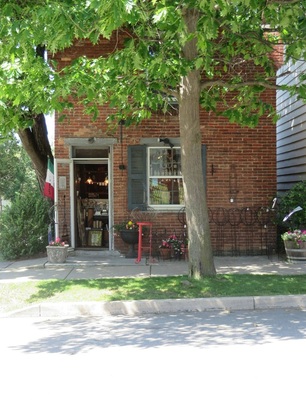 Current use: Gift Shop. Date built: 1830s;  original use/ owner’s  occupation: built for storage, artillery ammo, early 1900s used as a residence, in 1935 served as the  Post Office. It has served as a home, a store, a shoemaker's shop, a chair factory, a jewelry shop, a beauty shop and a studio.

Items of note: constructed with no internal staircase, had to go outside the back door and up an external staircase.  Walls constructed of beautiful thick brick (nearly 10 inches thick).  The bricks of the wall facing the street are arranged in stretcher bond style, while the sides are common bond.

The building is small, but tall!  It was completely renovated in the early 1970's by the architect Bob Hoffman who rented the building as an office from Carl and Joanne Hacker, then owners of Duffy's Tavern. The history of this property is intertwined with that of neighboring Duffy’s Tavern since the lots were originally purchased together by James Johnston. It is unclear when Johnston constructed the building or what the original purpose was.  Colonel Johnston was involved in many local enterprises, such as a saw mill and the tavern.   It may have served as an office for his businesses.

Some have conjectured the thick, brick walls are typical of armories.  Given his military background this is plausible.  Others contend that Johnston had a shoe shop and tax assessments do refer to him as a merchant.  In 1864, Johnston sold the tavern with adjacent stone house, and the little brick house to Henry Pratt who in turn sold to George Jack.  Jack was a wealthy merchant who owned a number of properties in Boalsburg including the wooden building next store.  Ownership of the Little Brick continued  to parallel ownership of the Tavern as the building “tagged” along with the sales of the latter.  Most of  the owners leased it for retail purposes, with two exceptions:  the Neville family of six used it as a residence and in 1935 it was home to the local Post Office.