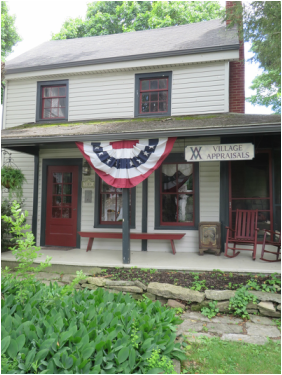 The frame building known as the "Peter Kuhn House" was constructed ca 1840. It sits on the eastern half of the original lot 25 of the 1809 Stroup plan that was once twice the size it is today.  The lot is 1/8 acre and once contained a shop and stable in addition to the house.  The house has a gable roof on both the main part and the rear extension. The roof is shingle covered and eaves overhang on the gable ends of both the front and rear extensions.  It has two double‑hung sash bays up and three down. However, the bays on the bottom are suspected to have been have been replaced with longer more esthetically pleasing bays of the post civil war era. The top bays are a 3/3 sash, and the bottom are 2/2 sash.

The exterior has been is completely resided with aluminum that covers all but a small portion at the rear where a small portion of the original wood German siding is visible. The house has a front and screened side porch that covers 1/3 the length of the house. The front porch is a facade porch and is simply supported by wooden beams.

The interior of the house consists of three floors. The first now used as a business, would have been the primary dwelling area.  It now consists of three large rooms; a bathroom, furnace room and a small hallway that accesses the front door and the stairway. There are two straight run stairways, one that leads from the first floor to the second floor and one that leads from the second floor to the third floor. The first floor stairway has a simple wooden railway that leads approximately 2/3 the way up the stairs. The second floor stairway does not have a railing but is enclosed between a support wall and an outer wall of the house. The kitchen was once a separate bam that was connected to the house.  It has a spiral staircase that has obviously been replaced, that leads to a loft like area.

This would most likely have been a hay loft in the bam. The kitchen now has a 4/3 bay in a small extension that has a pyramidal roof covered with shingles. The majority of the doors in the house are the original as are the closets, front door, and doors that separate the downstairs rooms. The house has all of its original hardware on all of the doors and closets

The house, which had several owners, was clearly designed for function and not style. The two most prominent owners were Peter Kuhn and Peter Ishler both of whom were involved in the meat business.   Old tax records indicate that between 1868 and 1894 Kuhn had been Boalsburg’s cooper and had also operated a meat and butchering business.  Ishler was likewise listed as a butcher and poultry supplier at the turn of the 20th century.   After his death his widow and her sister had a millinery shop in the house.